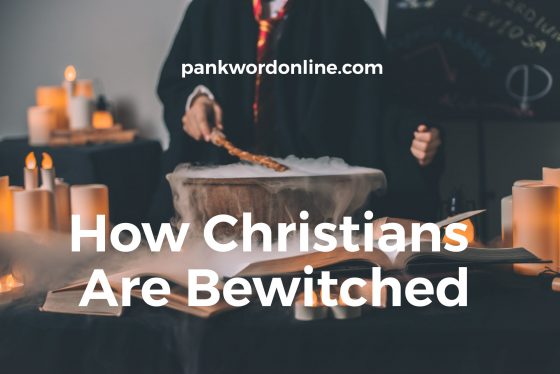 To bewitch means to cast a spell over (someone). Most of us may agree that a Christian cannot be BEWITCHED but the truth is MOST OF US right now have been bewitched and SOME OF US Bewitch other Christians.

Personally, I have been bewitched twice but I thank God I was able to recover within that same period because of a voice which I see.
About getting people to do things the God way, we don’t call it bewitching in our Grammar. I may talk more about it and perhaps show you how it’s done. You can even get to a realm where you put your words in the mouth of other people and they will say it for you or you will just ask people to come without opening your mouth and they’ll be there. It’s just amazing.
But before all that let me address the most important reason why we are having this conversation and why I am asking plenty questions this evening
Now, I have stated clearly already that Most of us have been bewitched and you wonder how?
Check out paddiechat.
If you will be attentive enough, you will do self-deliverance and also be able to keep your soul safe under God’s covering.
Let’s start with the Bible.
Galatians 3:1 O YOU poor and silly and thoughtless and unreflecting and senseless Galatians! Who has fascinated or bewitched or cast a spell over you, unto whom–right before your very eyes–Jesus Christ (the Messiah) was openly and graphically set forth and portrayed as crucified?
Paul, states emphatically that the WHOLE CHURCH – not some members – had been bewitched.
Let me tell you how I was bewitched.
I served both as President in my denomination and Organizing secretary back at SHS. Now the one who handed over to me took some time to advise and to teach me. He said to me one day, ‘It is not necessary to fast anymore’.
He went further to explain that the Bible said that The Lord Jesus became poor that we might be rich. He bore our sins in his body when he died. So as it stands, he fasted for us during the 40 days and nights. And went on to give some more biblical evidence.
Read Also: Principles of Faith
You see because he was higher than me, I wanted to accept that doctrine but there was a struggle and conflict in my spirit for weeks. I still remember it clearly even though it’s more than 4 years.
I later learned its a revelation from one of the Senior Generals in the vineyard of God.
This is what we call spiritual attack and Bewitching. This is how a Christian was Bewitching me. Most of us have come to accept certain false doctrines that have caused us to do things that make us miss the Blessings of God and these cause us to become spiritually ill. I have heard a lot of doctrines and my spirit immediately drives me scriptures that prove them unsound.
Check back again for the continuation of this message.
Have you been taught any doctrine that left a struggle or conflict in your spirit? Share with us in the comments below.
2+

How much does God pay? – God’s Basic Salary

Is Jesus concerned about our little ailments?

Can’t wait for the continuation

We use cookies on our website to give you the most relevant experience by remembering your preferences and repeat visits. By clicking “Accept”, you consent to the use of ALL the cookies.
Cookie settingsACCEPT
Manage consent

This website uses cookies to improve your experience while you navigate through the website. Out of these, the cookies that are categorized as necessary are stored on your browser as they are essential for the working of basic functionalities of the website. We also use third-party cookies that help us analyze and understand how you use this website. These cookies will be stored in your browser only with your consent. You also have the option to opt-out of these cookies. But opting out of some of these cookies may affect your browsing experience.
Necessary Always Enabled

Any cookies that may not be particularly necessary for the website to function and is used specifically to collect user personal data via analytics, ads, other embedded contents are termed as non-necessary cookies. It is mandatory to procure user consent prior to running these cookies on your website.